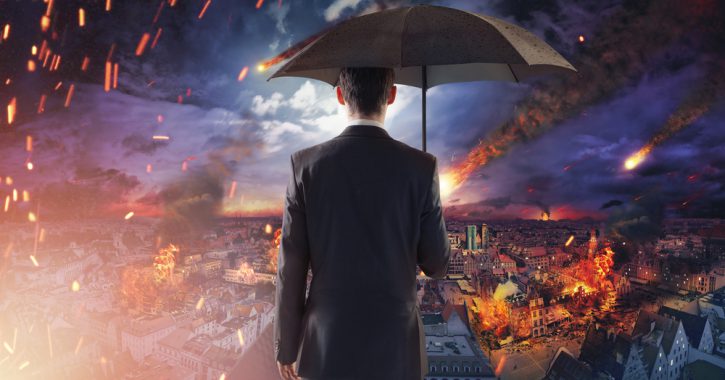 So, you’re thinking about adding fire insurance to your business cover. Or you have it already. But apart from knowing that it has something to do with covering the cost of dealing with a fire in your business… You’re a bit clueless. That’s okay. We’ve broken down what’s included with your cover right here, in plain English.

What ‘fire’ cover even means

First things first, let’s talk about what we mean when we say ‘fire’ cover. Essentially, this refers to loss or damage to your business property from a fire, lightning (or thunderbolt), subterranean (underground) fire, explosion, or earthquake. Yup, we don’t just limit it to ‘fire’. We’re pretty thorough.

We also aren’t known for being stingy, which is why we included cover for loss or damage from the impact of animals or trees (unless they were being felled), the impact of falling aerials, satellite dishes, vehicles, aircraft and other aerial devices or articles, and other special perils, like storm, wind, water, hail, and snow.

Architects and other professional fees

We’ll pay for the professional fees needed to reinstate or replace your business’ property, up to 25% of the whole amount you insured your business for.

We’ll cover alterations, additions, and improvements to your property, up to 25% of the overall insured amount of your business.

We’ll pay for all machines and labour to demolish and remove debris. We’ll even pay for providing erecting and maintaining hoardings if it’s needed during demolition, site clearing, and building operations.

You know the items that we remove and replace? Well, those become ours and you can ask us to give you first option to re-buy this stuff.

We’ll pay the costs of extinguishing the fire or fire-fighting, so long as you’re the 1 legally liable for these fees and your property was actually in danger from the fire.

This clause means that you’re still covered if a labourer, contractor, or employee does something or omits to do something in contradiction of your fire insurance cover.

This just means that our liability is restricted to money and stamps (up to R5,000), and documents, manuscripts, plans, business books, designs, patterns, models and moulds, computer systems records and media. The amount we’ll pay for these is limited to the cost of materials and labour.

If you (through your business) lend money to a borrower to purchase property, then you’re protected by this clause.

We’ll pay for municipal plans scrutiny fees so long as the total amount recoverable under any item doesn’t go over the sum insured for the building that’s affected.

This covers loss or damage to your business’ property if it’s caused by power surges and lightning strikes. It’s as simple as that.

Say there’s a property within 50km of your business premises that’s damaged by 1 of the perils we defined above, and this prevents you from accessing your property… We’ll pay for any loss of rent you incur.

If any of your business’ insured property is temporarily removed from your premises, we’ll pay for loss or damage caused by something that’s covered by our policy.

We’ll pay for the cost of making sure that your business’ building is up to scratch with government/local authority requirements.

Our attention to detail includes covering the cost of dealing with accidental damage to water, sewerage, gas, electricity and telecommunication connections which you own or for which you’re legally responsible, between your property and the public supply or mains.

Railway and other subrogation clause

It’s official. Under this clause, you won’t be prejudiced if you sign the ‘Transnet Cartage (Hazardous Premises) Indemnity’ clause or other special agreements with Transnet regarding private sidings or similar agreements with other government bodies.

If your business’ property (apart from stock) is damaged, we’ll pay an amount based on the cost of replacing or reinstating your stuff on the same site, of a similar kind.

We’ll pay for the costs of protecting (or attempting to protect) your business’ insured property after an insured incident, up to R500 per day and up to R10,000 per incident.

Upon our honour, we promise that your cover won’t be affected by any act or omission on the part of any owner of a building, or any tenant (other than you), without your knowledge.

We’ll cover any insured property loaded on a vehicle within your premises from loss or damage because of a risk that we described above… Unless it’s more specifically insured under a different  section of your business cover.

And here’s why you should choose our royal business insurance

Our expert business insurance team is just waiting to work with your broker to make sure that you have the cover that your business needs, for the most affordable premium. If you don’t have a broker, we’ll connect you with 1 best suited to you and your business.

Give your business our royal touch and protect it against a fiery death… Get in touch today.