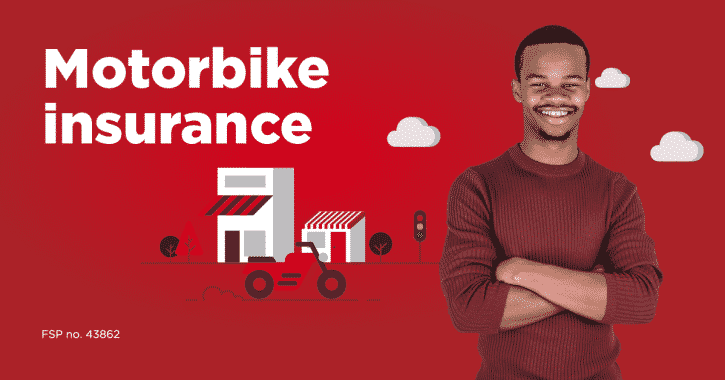 Remember when motorbike insurance wasn’t a thing? Ok, so motorbike insurance isn’t a new product… But it hasn’t always been a priority. Most of us have been so preoccupied with getting top-notch car and home insurance that we went ahead and forgot about insuring our 2-wheeled wonders. That’s changing now, though, because theft is on the rise, accidents are increasing, and the severity of these accidents is worsening.

Added to that, bikes aren’t getting any cheaper to buy, maintain, or fix up.

The king put some energy into making sure that all South African bikers can insure their ride the way that they want, for a super cheap price.

Check out these 4 options and let us guide you through what’s covered so that you can decide which motorbike insurance your bike needs.

Option 1: Going all in with comprehensive cover

This is the more expensive option, but for good reason. It really does come with all the bells and whistles.

The meat and bones of what’s covered is accident damage, theft and hi-jacking, and damage that you accidentally cause to other parties and/or their property as a result of a motorbike accident. That’s just the start. You’re also covered for hail damage, medical expenses for yourself after an accident, damage if the accident happens at track school, and damage from on/offloading or transporting your bike, or while it’s in transit. Oh, and you’re also insured for some business use, just not if you’re doing deliveries.

Who needs it? Right off the bat, if your bike is financed then you’ll need comprehensive cover. But those aren’t the only riders who should consider the comprehensive route. If your bike’s shiny, expensive, and you use it a whole heap (increasing your risk of getting into an accident), then this is the option for you.

Sure, you’ll pay less but that doesn’t mean you’ll have nothing to show for it. The king’s there for you and will pay out if your bike’s stolen or you’re hi-jacked. You’ll also be covered for liability for injury to other people and damage to their property if an accident happens.

The reason why you pay so much less is because you won’t be covered for hail damage or any accidental damage to your own bike. It’s important to know that.

Who needs it? Your bike’s slightly older but it’s still a mode of transport that you use and you need it. You’d be seriously inconvenienced without it but can’t afford comprehensive cover. If that’s you, then consider this insurance option and let the king cover risks that could part you from your bike.

Option 3: Pay a super low price for third party only

‘Third party only motorbike insurance’ is quite possible the longest name for the simplest level of cover. This policy’s incredibly affordable and covers you for liability for injury to other people or damage to their property as a result of an accident involving your bike.

Don’t be fooled. Damaging someone else’s fancy BMW G310GS or ploughing into the neighbour’s pool and putting a dent into their expensive pump’s going to cost you quite a lot. Thinking of a big sum of money? Double that amount. There… That’s probably more accurate.

Who needs it? Anyone with a super old (still roadworthy, though) bike that they’re using occasionally to get to and fro.

There are some bikes where some cover’s just so much better than no cover at all. Especially if you’re on a tight budget and are riding a bike that’s somewhat… Well, let’s just say that it’s seen better days. Or to make it even clearer, this bike’s value is as low as it gets but it runs, it’s roadworthy, and you do use it on the odd occasion.

You basically just want to cover it against theft and hi-jacking and that’s why this option exists.

A royal note worth knowing

We pointed it out earlier, but what really sets the king’s motorbike insurance apart from other products on the market is the fact that our comprehensive option covers business use (except deliveries). We’ve also revolutionised motorbike insurance by giving you the chance to add cover for any 1 of your super expensive accessories for just R1, like your helmet or leathers. That stuff’s pricey and easily stolen or damaged.

If you don’t already have our royal touch in your life, take the first step right now and get a quick quote here or call our royal client care team on 0860 50 50 50.